The top of the Liver Building
Liverpool is a city and seaport on the river Mersey in North-West England. It is currently a metropolitan borough within Merseyside but was previously in Lancashire.

Its population is somewhat over 400,000, but was almost double that in 1930. It owed its rise to its status as a major port, including a connection with the slave trade. At one time, 40% of the world's trade passed through its docks. It is known for its ethnic mix. Many of its inhabitants have Welsh or Irish ancestry. It has the oldest Black African community in the country and the oldest Chinese community in Europe. Notable landmarks include its two cathedrals (Anglican and Roman Catholic) and the Liver Building and other buildings on its waterfront.

Liverpool is known for its rich and diverse culture, and rose to world-wide fame during the 1960s with the popularity of the Beatles and other bands. Liverpool is internationally known for music and is recognised by Guinness World Records as the "World Capital City of Pop".[1] Musicians from the city have produced 56 number one singles, more than any other city in the world.[2][3]

Liverpool CHE Group was founded in 1970, and Liverpool Student Group and Liverpool Youth Group in 1972. Liverpool Gay Youth R Out (GYrO) was set up in 1976 [4].

Link was set up in 1977 as an umbrella organisation for gay men and women to work together and provided a meeting place.

SHADY (Sexual Health And Dykes) was a group working for the sexual health of lesbians in the 1980s.

Liverpool Pride has become an annual event, first held in 2010.

Seen magazine caters for the local gay and lesbian community.[5]

The Outsiders Film Festival is an LGBT film festival meeting monthly and in conjunction with Homotopia.

There is a Liverpool branch of Quest for gay Catholics.[10]

The News from Nowhere radical bookshop has an online directory of LGBT organisations in Liverpool and Manchester.[11] 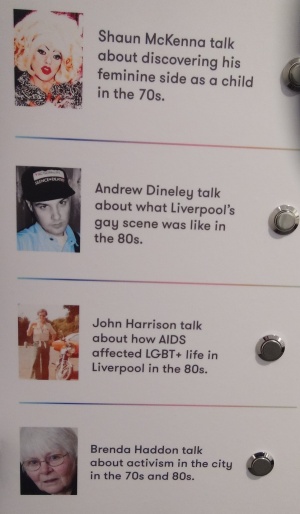