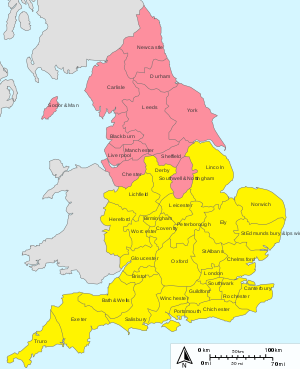 Dioceses of the Church of England (red=Province of York; yellow=Province of Canterbury)
The Church of England is the established church in England, part of the Anglican Communion. Its continuous history dates from the appointment of the first Archbishop of Canterbury in 597. The church was part of the Roman Catholic Church until 1534 when Henry VIII separated it from Rome in order to get a divorce.

The church comprises two provinces, Canterbury and York, each headed by an Archbishop. The province of York covers the northern part of England, with a separate bishop for the Isle of Man. The Province of Canterbury covers the southern part of England, with a separate bishop for Gibraltar and the continent of Europe. The Channel Islands are treated as part of the Diocese of Winchester. The Province of Canterbury also included the whole of Wales until the Church in Wales was separated off in 1920.

Each diocese is headed by a bishop, normally assisted by one or more suffragan bishops. Certain bishops have seats in the House of Lords, as "Lords Spiritual".

It is widely accepted that many Church of England clergy are gay or lesbian. There has been considerable controversy however about the appointment of gay men as bishops. The controversy has caused widespread disagreement within the wider Anglican Communion, particularly since the appointment in 2003 of Gene Robinson as bishop of New Hampshire in the United Sttes.

Michael Turnbull was appointed Bishop of Durham in 1994. It emerged that he had been convicted of gross indecency in a public lavatory in 1968. This led Peter Tatchell and others to protest at his enthronement, accusing him of hypocrisy for having spoken out against gay clergy. Outrage! followed this up by outing ten bishops as gay and hypocritical (their names have never been published in the UK,for legal reasons). David Hope, Bishop of London, was not one of the ten, but felt himself under pressure to come out and admitted that his sexuality was a "grey area" while saying that he had sought to lead a celibate life. Mervyn Stockwood, Bishop of Southwark, is considered to have been gay but celibate. Peter Wheatley, Bishop of Edmonton, was reported as being gay at the time of his appointment in 1999.[1]

In 2003, Rev Jeffrey John, who is in a celibate relationship with another man, was chosen to be Bishop of Reading, but withdrew in the ensuing controversy.[2] He was later appointed Dean of St Albans. In July 2010 there were reports that he was being considered for appointment as Bishop of Southwark[3]

In 2010, Colin Coward claimed that there were between ten and twelve gay bishops in the Church of England.[1]

In January 2013 the church ruled that gay clergy in civil partnerships are eligible to be bishops, provided they remain "celibate" (ie abstain from having sex).[4]

The Church of England (and the Church in Wales) is legally obliged to provide a marriage ceremony for people living in the parish in question. Given the church's official opposition to gay marriage, specific provisions were included in the Marriage (Same Sex Couples) Bill to prohibit the church from conducting same-sex weddings.

Church of England clergy are allowed to be in civil partnerships (but supposed to be "celibate") but are forbidden to have same-sex marriages. However some have defied this ruling: Rev Andrew Cain remains a vicar in north-west London, and was elected to the Church's General Synod, despite his marriage to Stephen Foreshaw in March 2015,[5] while Canon Jeremy Pemberton, a hospital chaplain in Lincolnshire, was stripped of his permission to officiate in Nottinghamshire.[5]