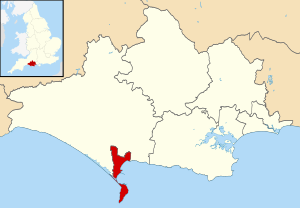 Location of Weymouth and Portland within Dorset
Weymouth and Portland is a former local government district in Dorset. In 2019 it became part of the new Dorset Council area. It comprised the seaside resort of Weymouth (including the former port of Melcombe Regis) and the Isle of Portland. Portland Harbour is one of the largest man-made harbours in the world, and was used for the sailing events in the London 2012 Olympics.

In April 2010 a pair of gay swans were reported to be nesting together in Weymouth.[1]

"Rainbow Night", billed as Portland's first gay night, was held at a local hotel in November 2011.[2]