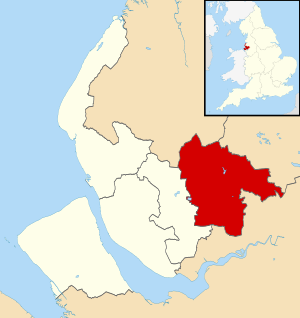 St Helens shown within Merseyside
St Helens is a town and metropolitan borough in Merseyside (formerly in Lancashire).

The footballer Lily Parr was born in St Helens in 1905.

In November 2010, Paul Hayhurst, described in court as a secret bisexual and cross dresser, was jailed for murdering Alexander Toner, in Hayhurst's flat in St Helens. They had met through Gay Rabbit.[1]

The local gay bar, Flex 2, closed in January 2013 when the premises were sold,[2] but is being replaced by Bamboo Bar.[3]