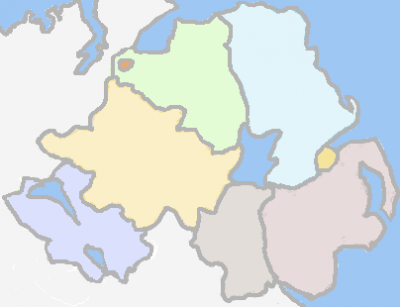 Northern Ireland: the historic six counties plus the two former county boroughs. Click on any blue name for the article in question.
County
Down
County
Fermanagh
County Derry /
Londonderry
County
Armagh
County
Antrim
County
Tyrone
Belfast
Derry /
Londonderry
Northern Ireland is one of the four countries making up the United Kingdom. It came into being with the partition of Ireland in 1921, comprising six of the nine counties of the historic province of Ulster. For the next 50 years it had its own devolved government and parliament, but these were abolished in 1973. From 1973 to 1998 Northern Ireland was ruled directly from London, but since 1998 it has had its own power-sharing executive and assembly (currently suspended).

The historic six counties, the basis of local government until 1973, are still recognised for various purposes:

From 1973 to 2015 Northern Ireland was divided into 26 districts for local government purposes, replacing the historic six counties. 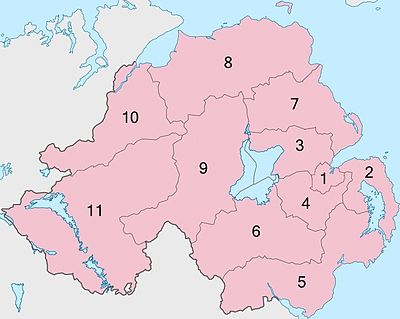 The change was a result of the judgement in the European Court of Human Rights case of Dudgeon v United Kingdom (1981) in which the ECtHR held that a prohibition on homosexual acts was a breach of Article 8 of the Convention.

In 2008 the age of consent for all individuals was lowered to 16 under the Sexual Offences (Northern Ireland) Order 2008 so it is now in line with the rest of the UK.

In October 2012, a motion calling for equal marriage was rejected by the Northern Ireland Assembly.[3]

In Northern Ireland unmarried couples, and civil partners, are not allowed to apply for adoption. This ban was ruled unlawful in 2012.[4]

In January 2017 the Northern Ireland assembly was suspended following failure to reach agreement between the two main parties. The issue of same-sex marriage has been one of the points of difference between the parties.

The Rainbow Project claims to be the largest LGB&T organisation in Northern Ireland,[7] and publishes a list of LGBT groups.[8]

Northern Ireland has had its own LGBT magazines, for instance Gay Star and Upstart, and more recently MyGayZine.