Not to be confused with Royal Holloway, a university in Surrey. 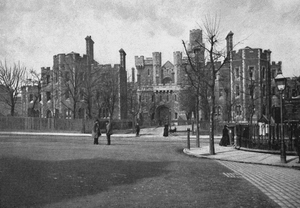 Oscar Wilde was held for a time at Holloway prison, which then housed prisoners of both sexes.

In 1911 Ethel Smyth composed the suffragette anthem "March of the Women" while a prisoner in Holloway prison.

Matthew Bourne went to a gay youth club (London Gay Teenage Group) there in his teens.