Gregg Blachford (born 1950) is a Canadian who started his involvement in gay rights while living in Australia (1972-73). After moving to London in 1973 to pursue his PGCE at the Institute of Education, he became one of the original members of the London-based Gay Left collective.

As a lecturer at Uxbridge Technical College, he was part of the early Gay Teachers Group set up after the sacking of John Warburton. Along with Bob Cant and others, Gregg successfully moved the Further and Higher Education Lecturers' Union (NATFHE at the time) to adopt (albeit it by a very slim margin) an anti-discrimination policy for gay and lesbian lecturers at NATFHE's annual conference in Buxton in 1976. 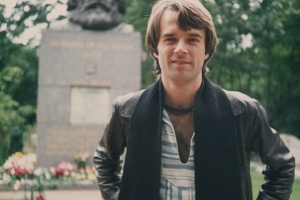 He relocated to Colchester in 1977 to obtain his MA in Sociology from the University of Essex where Ken Plummer was his supervisor. His thesis "Male Dominance and the Gay World" eventually became a chapter in the book "The Making of the Modern Homosexual", edited by Ken Plummer. From 1978-1981 he lived in Germany (Mönchengladbach) where he taught Sociology at Queen's School, a secondary school for children of the British Forces stationed there.

On his return to London, he got a job as a Lecturer at Paddington College which led him back to being involved with the Teachers in Further and Higher Education Lesbian and Gay Group (TFHELGG), pushing NATFHE to finally begin to put their anti-discrimination policy into practice. In March 1982, Gregg was appointed to be the first paid youth worker at the London Gay Teenage Group, where he worked part-time until July 1985. He also was a volunteer at Lesbian and Gay Switchboard (now Switchboard) from 1982 to 1987. He returned to Canada in 1990 and is now living in Montreal.