From LGBT Archive
(Redirected from CHE)
Jump to: navigation, search

CHE logo
The Campaign for Homosexual Equality (CHE) is one of the oldest gay rights organisations in the United Kingdom. It is a membership organisation which aims to promote legal and social equality for LGBT people in England and Wales. CHE was one of the two main English gay rights organisations of the 1970s, along with the Gay Liberation Front, but during the 1980s organisations such as Stonewall (UK) and Peter Tatchell's OutRage! became more influential. CHE had 2,800 members and 60 local groups by 1972. At its peak in the middle 1970s it was claiming 5,000 members and some 100 local groups. By the 1990s its membership had diminished.

CHE's activities included pressing for law reforms, providing educational material for use in schools, and attempting to influence the provision of medical, psychiatric and social services. Since the 1980s, CHE has continued to campaign, although with reduced membership the range of its activities have been greatly reduced.

CHE began in 1964 as the North Western Homosexual Law Reform Committee (NWHLRC), founded in Manchester by Allan Horsfall and Colin Harvey. The formal launch took place at a public meeting on 7 October 1964 at Church House, Manchester. After the Sexual Offences Act 1967 came into force, the London-based Homosexual Law Reform Society was thought by many to have achieved its aims.

The NWHLRC, which in 1967 had already fallen out with Antony Grey of HLRS/Albany Trust over the northerners' wish to press ahead with the Esquire Clubs venture to establish member-run gay clubs, felt that much remained to be done, and named itself the Committee for Homosexual Equality (CHE) in 1969 with a view to becoming a national body for England and Wales, in co-operation with its counterpart north of the border, the Scottish Minorities Group (SMG).

Among CHE's leading members in this period were the writer and broadcaster Ray Gosling, and the academic Michael Steed. Both continued to be Vice-Presidents of the organisation.

In 1972 a CHE London Information Centre (CHELIC) was opened in a basement in Great Wndmill Street, Soho. 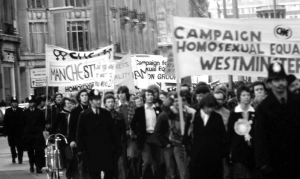 It raised money to rent an office in Manchester and employ a full-time General Secretary, Paul Temperton, and it set out to become a fully democratic "bottom-up" membership organisation.

In 1971 CHE members took part in the first major gay demonstration in London. On 28 August the Gay Day began in Hyde Park, followed by a march to Trafalgar Square, nominally to protest at the unequal age of consent. Between 500 and 1,000 marchers were reported to have attended.

In 1973 CHE held the first national gay rights conference in Morecambe (see below for a list of Conferences).

In 1974 CHE organised a national Homosexual Equality Rally in London. The rally was supported by the women's movement and people from ethnic minorities. Where earlier actions had concentrated on legal protection from criminal persecution, this rally was part of gay and lesbian people starting to establish a distinct sexual identity. Those who turned out for the rally did so to support the extension of constitutional rights and universal values to lesbian and gay people.

CHE, together with its Scottish (SMG) and Northern Irish (USFI) equivalents, produced a draft Law Reform Bill in 1975 and devoted much energy to lobbying parliamentarians to introduce it. Among other things, the Bill would have brought about a common age of consent of 16 for all sexual behaviour, something not in fact achieved until many years later. In December 1975 CHE published the first edition of 'Youth News' about the CHE Teenage Movement. It was produced by Trevor Locke, Tel Airs, Tony Hancock and Mike Imber [1].

In 2005 Derek Oyston, a CHE member from Gateshead, left a substantial amount of money to CHE. The Executive then consulted with the membership about the possibility of applying for charitable status.[2] but it was decided not to pursue this route as it would have made it difficult for CHE to conduct political campaigns.[3]

In 2010 CHE's Secretary Griffith Vaughan Williams died. He had been one of the most active members of the organisation for many years. Shortly before his death, he signed a contract for the official history of CHE and its times to be written by Peter Scott-Presland. The first volume of the history was published in February 2015.

Allan Horsfall, CHE's Life President, died in August 2012, and CHE held a well-attended event in Manchester Town Hall in his memory. Ray Gosling, another of the founders, died in November 2013.

On 7 October 2014, to commemorate CHE's 50th anniversary, a plaque was unveiled by the Bishop of Manchester and the Lord Mayor of Manchester at Church House, the offices of the Anglican Diocese of Manchester, where the first NWHLRC meeting had been held in 1964.[4] The same evening, CHE received the 2014 Alan Turing Memorial Award as part of the Homo Heroes Awards ceremony organised by the Lesbian and Gay Foundation.[5]

CHE has been holding annual conferences since 1973:

In recent years the Conference has been a one-day event in London.

CHE's local groups throughout England and Wales were often highly independent, producing their own newsletters giving details of social and campaigning activities in their own area. Local groups and members had input into CHE policy through the National Council, which met quarterly at different venues through the country, and was composed of CHE members elected by the whole membership. Annual conferences also continued to be held; these were major, multifaceted events covering a long bank-holiday weekend and can be seen in hindsight as key moments in the struggle for gay rights in Britain.

The history of CHE is being written by Peter Scott-Presland with the general title of Amiable Warriors. Volume One was published in 2015, and two further volumes are planned.

London Friend was set up in London in 1971 as a CHE taskforce intended to become CHE's counselling arm. It became a successful organisation in its own right, and was separated from CHE in 1975.

In 2006 CHE began discussions with GALHA about a possible awards ceremony to follow on from the discontinued Mike Rhodes Awards.[2] This led to the inauguration of the Derek Oyston Achievement Award, given on two occasions, in 2009 and 2011. The Derek Oyston Film Award was awarded annually from 2009 to 2013. CHE has also on several occasions helped to support the Pre-launch for LGBT History Month.

Allan Horsfall was Honorary Vice-President until his death.