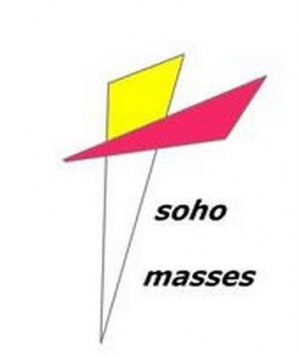 Soho Masses logo
LGBT Catholics Westminster (formerly Soho Masses Pastoral Council) is a community that welcomes and is open to Roman Catholics. It has an active fellowship of many LGBT Catholics, as well as their parents, families and friends. From 2007 to 2013 mass was celebrated at 5pm on the first and third Sundays of the month, at the Church of the Assumption and St Gregory, Warwick Street, Soho.

From Camden Town to St Anne's

Masses in Westminster Diocese, welcoming LGBT Catholics, parents, families and friends, began in April 1999 on the Sunday following the bombing of the Admiral Duncan public-house in Old Compton Street. These liturgies were first held in the Convent of the Helpers of the Holy Souls in Camden Town, London.

When the Convent property was sold in 2001, the LGBT worshipping community relocated temporarily to St Anne’s Anglican Church, Dean Street, Soho. As the congregation enlarged in its Soho location, it eventually outgrew the space available.

In March 2007, following a period of consultation with Diocesan representatives, LGBT Catholics, parents and friends were invited to transfer first and third Sunday 5pm Masses from St Anne’s to the Church of Our Lady of the Assumption and St Gregory. A statement encouraging “full and active participation” by LGBT Catholics in the life of the Church was issued by the Diocese of Westminster on 2 February 2007. The Soho Masses Pastoral Council was invited to make its own statement regarding the initiative. A further statement from Westminster Diocese confirming this pastoral provision was released on 17 December 2007.[1]

The Church of Our Lady of the Assumption & St Gregory[2] dates back to 1724,and originated as the chapel of the Bavarian and subsequently Portuguese embassies, at a time when the "Penal Laws" prohibited the opening of Roman Catholic churches. It became a parish church in 1854.[3]

During the 18th and 19th centuries, parts of this area offered refuge to poorer people who served the better-off merchants living in nearby Mayfair. The “Portuguese Chapel” and St Anne’s Parish Church were noted for their ministry to the poor. There are, therefore, historical precedents in reaching out to marginalised groups in the area.

Many of those who used the Church of the Assumption did so due to historical ties, having worked in the area, being received into the Church, or married there. Workers from local hotels, restaurants, shops and offices, also use the church on weekdays. The parish is dependent financially upon income generated by the letting of commercial property in the adjoining building in Golden Square, as well as church collections.

The regular first and third Sundays’ evening congregation had a regular attendance of well over 100, with an estimated overall contact with 250-300 people. These Masses were served by a rota of 15 priests from a variety of dioceses and religious communities. The Soho Masses Pastoral Council, twelve people,elected on an annual basis by regular Mass participants, was responsible for planning these liturgies, and a number of other pastoral events.

The existence of the Soho Masses has been condemned by some Catholics.[4]

In January 2013 it was announced that the Church of Our Lady of the Assumption and St Gregory was being assigned to the Personal Ordinariate of Our Lady of Walsingham (catering for former Anglicans who had transferred to the roman Catholic Church).[5] The last Soho Mass took place in February,[6] and from 3 March was replaced by LGBT Catholics Westminster worshipping at the Jesuit Church of the Immaculate Conception in Farm Street, Mayfair, which "notoriously refused entry to Oscar Wilde 116 years ago, following his release from jail."[7]