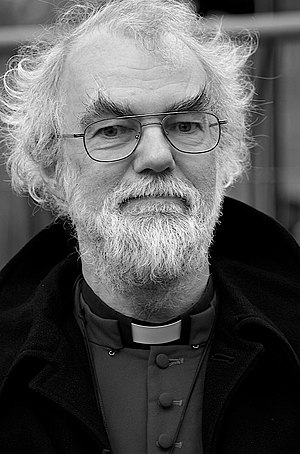 Rwan Williams was born in Swansea to a Welsh-speaking family. He studied at both Christ's College, Cambridge and Wadham College, Oxford, becoming Professor of Divinity at Oxford. From 1992 to 2002 he was Bishop of Monmouth and from 1999 to 2002 he was also Archbishop of Wales. In 2002 he became Archbishop of Canterbury, and thus head of the Church of England and the Anglican Communion. He is a patron of Affirming Catholicism, which promotes a liberal Anglo-Catholic position within the Church of England, including support for women bishops. His time at Canterbury has been marked by divisions within the Anglican Communion about gay issues and the position of women in the church.

In March 2012, it was announced that he had accepted the position of Master of Magdalene College, Cambridge. He stood down as Archbishop of Canterbury in December 2012.[1] and in 2013 he was appointed to the House of Lords as Baron Williams of Oystermouth.

In his days as an academic, Dr Williams had a reputation for being liberal on issues of gay sex and the church. In 1989 he delivered the 10th Michael Harding Memorial Address to LGCM. The lecture was entitled The Body's Grace and concluded:

In a church that accepts the legitimacy of contraception, the absolute condemnation of same-sex relations of intimacy must rely either on an abstract fundamentalist deployment of a number of very ambiguous biblical texts, or on a problematic and nonscriptural theory about natural complementarity, applied narrowly and crudely to physical differentiation without regard to psychological structures.

Dr Williams' appointment as Archbishop of Canterbury was widely welcomed by those hoping for a relaxation in the Church's attitude to gay clergy. However there was disappointment in 2003 when Dr Jeffrey John, the gay but celibate Dean of St Albans, was blocked from becoming a bishop.

On the general question, Dr Williams said in September 2010 "There's no problem about a gay person who's a bishop. It's about the fact that there are traditionally, historically, standards that the clergy are expected to observe." Asked what was wrong with a homosexual bishop having a partner, he said: "I think because the scriptural and traditional approach to this doesn't give much ground for being positive about it."[3]