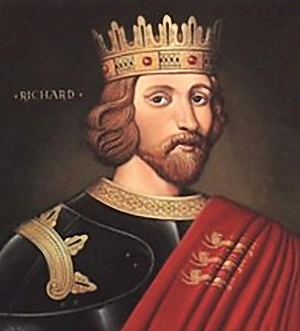 Richard spent little time in England, preferring to live in his Duchy of Aquitaine. He took part in the Third Crusade, conquering Cyprus in 1191, but failing to conquer Jerusalem. On the way home from the Crusade he was shipwrecked and made his way overland, being captured near Vienna by the Duke of Austria and handed over to the Holy Roman Emperor. He was released in return for a ransom of 150,000 marks. Later legends relate that his minstrel Blondel travelled to Austria and found where the King was imprisoned by singing outside the castle.

In 1187 Richard slept in the same bed with the 22-year-old King Philip II of France, but this is regarded as a symbol of friendship between the two countries with no sexual connotations. However a number of historians have maintained that Richard was homosexual, or at lest bisexual.