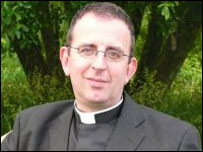 Rev Richard Coles
Richard Coles (born 26 March 1962) is a musician, journalist, broadcaster and Church of England priest. He is known for having been the multi-instrumentalist who partnered Jimmy Somerville in the 1980s band The Communards, which achieved three Top Ten hits, including the Number 1 record and best-selling single of 1986, a Hi-NRG version of Don't Leave Me This Way. He also appears frequently on radio and television as well as in newspapers. In March 2011 he became the regular host of BBC Radio 4's Saturday Live programme.

Coles was born in Northampton and educated at Wellingborough School (where he was a choirboy).

Coles had learned to play the saxophone, clarinet and keyboards and moved to London in 1980 where he played in theatre. In 1983 he appeared with Jimmy Somerville in the Lesbian and Gay Youth Video Project film Framed Youth: Revenge of The Teenage Perverts, which won the Grierson Awards. Coles also played clarinet on It Ain't Necessarily So, which was a hit single in 1984 for Bronski Beat.

In 1984 Somerville left Bronski Beat and he and Coles formed The Communards, who were together for just over three years and had three UK Top 10 hits, including the biggest-selling single of 1986 with a version of Don't Leave Me This Way, which was at Number 1 for four weeks. They split in 1988 and Somerville went solo.

Coles provided narration for The Style Council's film JerUSAlem in 1994, and also started a career as a writer and journalist, most notably with the Times Literary Supplement and the Catholic Herald. He has stated of this period in his life that "I went on all the right marches, went to all the right clubs, read Marxism Today and the New Statesman."

After a successful career in the media, Coles came to the Christian faith after attending the funeral of a close friend: the first funeral he had been to for someone who had died of AIDS. From 1991 to 1994 Coles read for a BA in theology at King's College London. He was selected for training for priesthood in the Church of England and began his training at the monastic College of the Resurrection, Mirfield, in 2003 before being ordained in 2005.

After ordination Coles worked as curate at St Botolph's Church in Boston, Lincolnshire, and subsequently at St Paul's Church, Knightsbridge, in London with his dachshund, Daisy as his "faithful assistant". He has been chaplain of the Royal Academy of Music and has also played Dr Frank N Furter in a local concert and conducted an atheist funeral for Mo Mowlam in 2006.

Coles was an inspiration for the character of Adam Smallbone (played by Tom Hollander) in the 2010 BBC Two sitcom Rev.

In January 2011 Coles was appointed as the parish priest of St Mary the Virgin, Finedon in the Diocese of Peterborough.