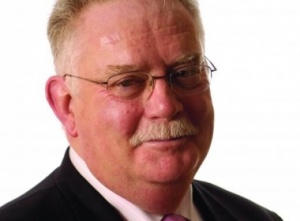 Paul Flowers
Rev Paul Flowers (born 1950) is a Methodist minister and businessman. He was Chairman of the Co-operative banking group from 2010 to 2013. He was a Labour Party councillor in Bradford for 10 years. He has been a Trustee of the Terrence Higgins Trust.

"The Stonewall Workplace Equality index ranked the Co-op as the third-best organisation in the UK for LGBT people to work. Methodist minister Flowers is also a trustee of HIV charity Terrence Higgins Trust."[1]

In November 2013 he testified to the Treasury Select Committee about the circumstances surrounding controversial investment decisions by the Co-op Bank.[2]

A few days later he was filmed apparently agreeing to buy cocaine and crystal meth.[3]

Flowers was immediately suspended by the Methodist ministry for three weeks [4] and suspended as a member of the Labour Party.[5] Flowers in a statement said:

"This year has been incredibly difficult, with a death in the family and the pressures of my role with the Cooperative Bank. At the lowest point in this terrible period, I did things that were stupid and wrong. I am sorry for this, and I am seeking professional help, and apologise to all I have hurt or failed by my actions."[4]

On 21 November 2013 he was arrested by Merseyside police in connection with a drugs supply investigation.[6]