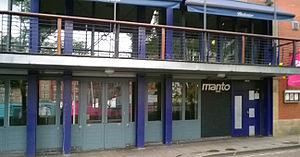 Manto was created when Carol Ainscow, a gay property developer, alongside her business partner Peter Dalton, bought a run-down building on Canal Street. It opened in 1991. The building, designed by Benedict Smith Architects[1] was the first in the area to be clad with large plate glass windows,[2] allowing the casual passer-by to view what was going on inside. Previously many establishments catering for the gay community were keen to conceal activities from the general public, but the architectural design of Manto was seen as a queer visual statement "we're here, we're queer – get used to it". A brick-and-mortar refusal to hide any more, to remain underground and invisible.[3] Ainscow stated, "I felt sick of having to knock on doors and hide".[4] Despite this, Ainscow stated that the for the first six months of business, Manto was continually losing money due to people's fear of being seen in there.[4] The opening of Manto was regarded as a catalyst for the development of many of the current style of bars and clubs in the Village.[5]

"Manto was one of the catalysts for Manchester's now-established bar scene, proudly showcasing the creativity and vibrancy of the gay scene behind a glass front for the first time. Now more institution than rebellious innovator, it's nevertheless still a big draw."[6]

Manto is one of the stops on the Manchester LGBT Heritage Trail. The write-up says:

"It was a world away from the New Union and pushed the Village to the forefront of Manchester's (even the UK's) going out and coming out culture. It’s hard to understand now how a bar with balconies in which one could sip coffee and read the Sunday papers could be so revolutionary. Manto was very successful and bred an offshoot in London, a sibling round the corner, and ran the popular gay and lesbian club, Paradise Factory."[7]

The bar was highlighted in the mid 1990s by Bisexual Action Manchester as one of the venues in the gay village operating "no bisexuals" door policies.

Partly based on the Wikipedia article "Canal Street (Manchester)".