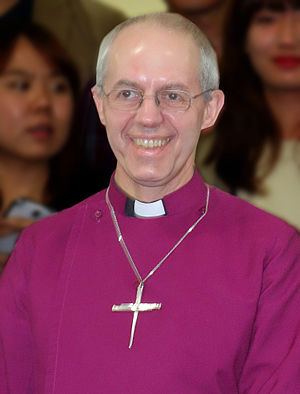 Justin Welby
Justin Welby (born 1956) was appointed in 2012 as Archbishop of Canterbury.

He was educated at Eton College and then Trinity College, Cambridge and worked in the oil industry before studying at Durham University for ordination. He became Dean of Liverpool in 2007 and Bishop of Durham in 2011. He is on the Evangelical wing of the the Church of England.

According to The Daily Telegraph, Welby supports "the Church of England's opposition to same-sex marriage", although he stated that he is "always averse to the language of exclusion, when what we are called to is to love in the same way as Jesus Christ loves us."[1]

In June 2013 the Archbishop, with other bishops, voted to block the second reading in the House of Lords of the Marriage (Same Sex Couples) Bill, but in response to the large majority in favour of letting the Bill go forward, the Church of England was said to have abandoned its opposition to the Bill.[2]