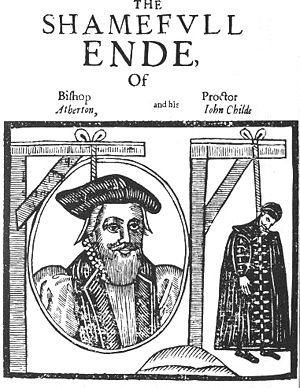 Cover of an anonymous pamphlet, 1641
John Atherton (1598–1640) was the Anglican Bishop of Waterford and Lismore in the Church of Ireland. He and John Childe (his steward and tithe proctor) were both tried and executed for buggery in 1640, under a law that Atherton himself had helped to institute.

Atherton was born in 1598 in Somerset. He studied at Oxford University and joined the ranks of the Anglican clergy. In 1634 he became Bishop of Waterford and Lismore in the Church of Ireland. He noticed a gap in the British sodomy laws, in that they had not been extended to Ireland, and caused the gap to be filled.[1] However this was to be his undoing. In 1640 Atherton was accused of buggery with John Childe, his steward and tithe proctor. They were both condemned to death, and Atherton was executed in Stephen's Green, Dublin. Reportedly, he confessed to the crime immediately before his execution, although he had proclaimed his innocence before that. More recently, some historical evidence has been developed that shows Atherton might have been a victim of a conspiracy to discredit him and his patrons. This was attributable to Atherton's status as an astute lawyer, who sought to recover lost land for the relatively weak Anglican Church of Ireland during the 1630s. Unfortunately for Atherton, this alienated him from large landowners, who then allegedly used his sexuality to discredit him.

Furthermore, English Puritan activists were actively campaigning to abolish bishops within the embattled Church of England, so they also had an interest in Atherton's downfall.[2]

Posthumous accusations of sexual wrongdoing also include allegations of "incest" with his sister- in-law, and infanticide of the resultant child, as well as zoophilia with cattle. However, these allegations began to be circulated several months after his death in an anonymous pamphlet, and may have been intended to further discredit the bishop's campaign to restore the finances of the Anglican Church of Ireland.[3]

Derived from a Wikipedia article.