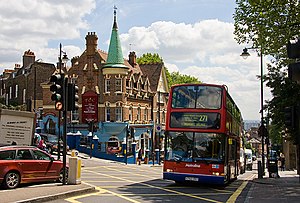 Highgate Hill
Highgate is an area of North London, to the east of Hampstead Heath and divided between the London Boroughs of Camden, Haringey and Islington.

Highgate ponds include three swimming ponds, for men, women, and mixed respectively. The men's pond has a clothing-optional sunbathing area.

Highgate School is a public school, formerly for boys only, now co-educational, and no longer taking boarders.

Local residents have included George Michael, Stephen Gately and Rebecca Root. Gately said he "wouldn't move away for the world. It has a great vibe and the people here are brilliant".[1]

Peter Scott-Presland is a former pupil of Highgate School (an Old Cholmeleian).