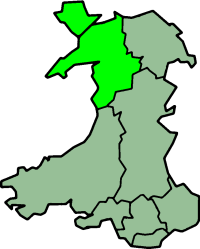 The former county of Gwynedd

The current Gwynedd unitary authority area
Gwynedd is an area of North-West Wales, now including most of the Snowdonia National Park.

In ancient times it was a kingdom.

In 1974 it was resurrected as the name of a county.

In 1996 the county was abolished, but the larger part of it (excluding Aberconwy and the Isle of Anglesey) is now the Gwynedd unitary authority area. The previous county (excluding the part that has been moved into Clwyd) continues for ceremonial purposes as a preserved county.

Notable towns within Gwynedd include Bangor and Caernarfon.

Gwynedd is part of the North Wales Police area.

The ancient kingdom of Gwynedd was ruled in the 6th century by the legendary King Maelgwn.

There was a Gwynedd CHE Group at one time.

Gay Gwynedd and North Wales is a website with local LGBT information.[1]