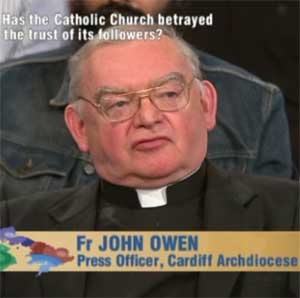 Speaking on BBC1’s Big Questions programme in May 2009, which focused on child abuse scandals in the church, he stated that “most of the offences are being committed by homosexuals”. He was the communications officer for the archdiocese of Cardiff at the time.[1] Later that year he resigned as Catholic Chaplin at Cardiff University.[1]

He was named in the Stonewall Awards 2009 as Bigot of the Year, jointly with Jan Moir.