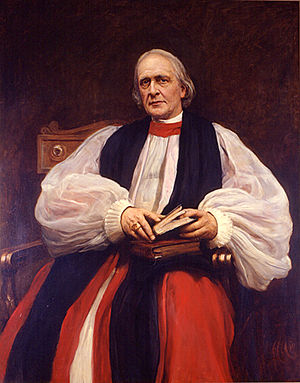 Benson was educated at King Edward's School, Birmingham and Trinity College, Cambridge. He was a schoolmaster at Rugby School and later the first headmaster of Wellington College before becoming Bishop of Truro (where he devised the Festival of Nine Lessons and Carols) and then Archbishop of Canterbury. A story he told to Henry James became the basis of James's ghost story, The Turn of the Screw, which was later adapted as an opera by Benjamin Britten.

Benson is thought to have had suppressed homosexual tendencies:

[His sister recalled] "his 'almost romantic attachment' to his headmaster and as a Cambridge undergraduate Benson himself confided in his diary a fear that 'I might on some sudden occasion be led into a step I might all my life repent'."[1]

Benson's wife, Mary Sidgwick, known as Minnie, was lesbian, and lived, after Edward’s death, with Lucy Tait, the daughter of her husband’s predecessor as Archbishop. Edward and Minnie had six children, none of whom married, and five of whom are thought to have been gay: