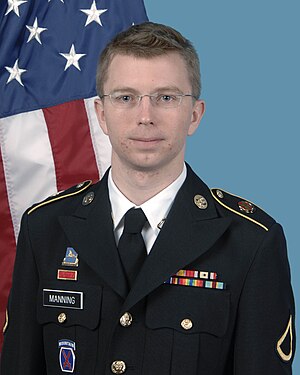 Chelsea in April 2012
Chelsea Manning (Chelsea Elizabeth Manning, born Bradley Edward Manning, 1987) is an American soldier, who was convicted in 2013 of leaking large numnbers of classified documents to Wikileaks.

Chelsea Manning was born in Oklahoma. Her mother was Welsh and her father was American: they had met while he was in the US Navy and stationed at Cawdor Barracks near St David's, Pembrokeshire. They divorced in 2000, and Chelsea moved with her mother to Haverfordwest. In 2005 Chelsea returned to the USA and began living as a gay man. She joined the army in 2007.

In 2009 she was sent to Iraq, where she began to have access to highly classified information. In 2010 she began releasing information to Wikileaks. She was arrested in May of that year, and sentenced at her trail in 2013 to 35 years in prison. Following her trial she announced that she wished to be treated henceforward as a female.