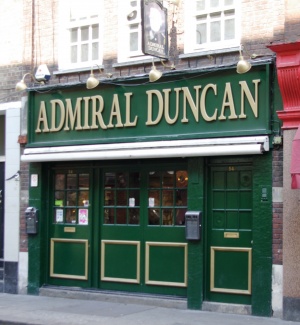 The Admiral Duncan is a pub in Old Compton Street, Soho in the heart of London's gay district. It is named after Admiral Adam Duncan, who defeated the Dutch fleet at the Battle of Camperdown in 1797.

The Admiral Duncan has been trading since at least 1839. In December 1881 a customer received eight years penal servitude for various offences in connection with his ejection from the Admiral Duncan public house by keeper William Gordon.

It was once in the ownership of the Scottish & Newcastle Brewery but was bought in 2004 by the Tattershall Castle Group, now known as TCG Acquisitions. The exterior of the bar was repainted in a black and pink motif in late 2006.

In late 2005, Westminster City Council decreed that the Admiral Duncan and all other LGBT bars and businesses that operated in its jurisdiction, including those in Soho and Covent Garden, remove their rainbow flags claiming that such flags constituted advertising which was forbidden in its planning laws.[1] Businesses would be required to apply for permits to be allowed to fly flags but those businesses that did apply for permission found their applications turned down for spurious reasons. Following media allegations of homophobia in the Council, the I Love Soho campaign and intense pressure from the Mayor of London, Ken Livingstone, the Council rescinded its directive and Pride Flags were once again permitted to be flown.

On 30 April 1999, the Admiral Duncan was the scene of a bomb blast when the Neo-Nazi David Copeland, who was attempting to stir up ethnic and homophobic tensions by carrying out a series of bombings, detonated a nail bomb which killed three people and wounded around 70.

Copeland's previous bomb attacks, on the 17th and 24th of April, had made Londoners wary; although they had been described as race-hate attacks, police had issued a warning that a gay bar could be the bomber's next target, and The Yard – another pub in the area – had displayed a poster warning customers to be alert. The unattended bag containing the bomb was noticed by patrons of the Admiral Duncan; it exploded at 6:37pm, just as it was being investigated by the pub manager, Mark Taylor.

The dead were identified as Andrea Dykes, 27, four months pregnant; her friend, Nik Moore, 31; and John Light, 32, the best man at the wedding of Andrea and her husband, who was himself seriously injured.

There is a memorial chandelier with an inscription and a plaque in the bar to memorialise those killed in the blast and the many more who were injured, several very seriously; a number of people lost eyes or limbs.

A large open air meeting was spontaneously organised in Soho Square the Sunday following, attended by thousands. Among the speeches was one from the Metropolitan Police Assistant Commissioner, who undertook to maintain a crime scene van outside the pub to take witness statements and gather evidence until the perpetrator was found; the van would be staffed entirely with openly gay and lesbian police officers. This was a turning point for the often tempestuous relationship between the LGBT community and the Metropolitan Police.

The playwright Jonathan Cash, then working for Gay Times, was among the injured. He later used the experience as the basis for his play, The First Domino, about a fictional terrorist being interviewed by a psychiatrist in a top-security prison.

Bar manager David Morley, who was also injured in the bombing, was murdered in London on 30 October 2004.