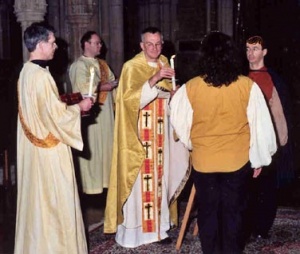 A scene from the re-enactment of a same-sex union ceremony in a church in Croydon. Roger Burg as the priest is about to give lighted candles to the couple being joined together.
Adelphopoiesis (Greek ἀδελφοποίησις, literally the making of brothers) refers to a number of ceremonies used by different branches of the Christian church in the middle ages, to unite people of the same sex. The exact meaning of these ceremonies has been debated. The American writer John Boswell interpreted them as almost the equivalent of gay marriage. However the British gay historian Alan Bray was more cautious in his interpretation.

In 2004, in the period leading up to the introduction of civil partnerships in the UK, some members of Croydon Area Gay Society staged re-enactments of a version of the ceremony, in both its Eastern Orthodox and its Roman Catholic versions.

A booklet describing the re-enactments was sent to selected members of the House of Lords, with a letter asking them to vote in favour of civil partnerships, and was mentioned during the Lords debate.

A further re-enactment, held in February 2008 as part of Croydon's contribution to LGBT History Month, also featured sworn brotherhood in English history, with examples from Chaucer and traditional ballads, with a mention of Sir John Clanvowe and Sir Richard Neville.

http://www.samesexunions.org.uk An account of the re-enactments, with background material (dead link: archived version available at http://web.archive.org/web/20150221180454/http://www.titipu.demon.co.uk/samesexunions/)