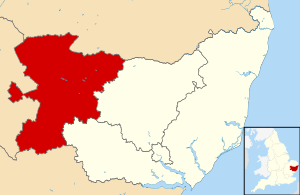 West Suffolk shown within Suffolk
West Suffolk is a local government district]] in Suffolk It was established on 1 April 2019, by merging the Forest Heath district with the borough of St Edmundsbury. The two councils had already had a joint Chief Executive since 2011. At the 2011 census, the two districts had a combined population of 170,756.

Between 1888 and 1974 there was an administrative county of West Suffolk, covering a larger area than the present district.