Tricky Dicky Tricky Dicky (real name Richard Scanes) was a popular disc jockey in London and Essex during the 1970s and 1980s. He worked as a public health inspector before turning to running discos and coming out as a gay man. One of his earliest discos was at the Kings Arms, 213 Bishopsgate, London E C 2. 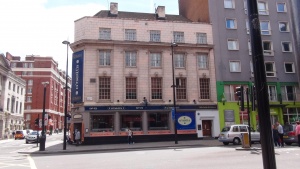 Other venues included the Father Redcap in Camberwell; the Hornsey Wood Tavern, Seven Sisters Road, N 4; Spats in Oxford Street, London; The Arabian, 234 Cambridge Heath Road, London E 2; Benjy's in the Mile End Road, London; the Euston Tavern, Euston Road, London and Pidgeons in Stratford, East London. In 1975 Scanes was found guilty of aiding and abetting the running of a disorderly house at the Father Redcap. Scanes died in 2016, aged 75.