Difference between revisions of "Soho" 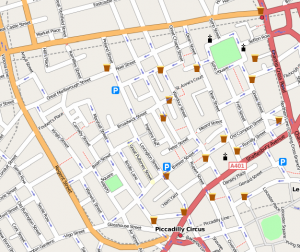 Soho
Soho is a quarter in the West End of London considered to be the gay district of the city. This is due to its popularity with LGBT people, its high concentration of bars, eateries and shops, as well as its traditional creative and media industries as well as theatres. A central street, often regarded as the gay street in London, is Old Compton Street. Soho used to have a prominent red light district [1].

Soho had long been a traditional place for gay people to hang out: Harry's Restaurant in Lisle Street was noted as a "resort of perverts and women of Ill-repute" in the 1930s. The area experienced a quick and large growth of modern gay bars and eateries in the early 1990s, such as The Village, The Yard and The Edge.

The gay scene of Soho is often thought of as attracting a younger more fashion-conscious and mixed crowd than other gay districts, such as Vauxhall. Soho preceded Vauxhall as a popular place for gay people to hang out, but also followed Earls Court, which was popular in the 1970s and 80s with clones, most notably due to the Coleherne pub and Brompton's nightclub.

Sweatbox Soho is a gay sauna and gym.

Soho Pride started in 1994 as the Soho Pink Weekend organised by Gary Henshaw and encouraged by The Village bar owner Gordon Lewis.

On 30 April 1999, two people were killed and many injured when the Admiral Duncan pub was blown up using a nail bomb. It was a Friday night and the start of a long bank holiday weekend. Many people had finished work and were enjoying the spring evening in Soho.

Artist Francis Bacon frequented The French House in Dean Street, his portrait is still on the wall in the ground floor bar.