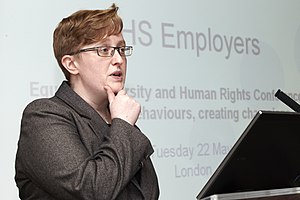 Ruth Hunt addresses delegates at NHS Employers' first equality and diversity conference
Ruth Hunt (born 1980) is Chief Executive Officer of Stonewall. She was appointed in 2014, having previously been deputy CEO.

Ruth hunt was born in Cardiff, went to school in Cardiff and Birmingham and studied at St Hilda's College, Oxford.

She was listed at number 5 in the Independent on Sunday's Pink List 2013. The citation said:

"The newly appointed deputy CEO of Stonewall has been a leading voice in this year’s campaign to legalise equal marriage. The Roman Catholic campaigner has been vocal about the need to provide a 'safe space for gay Catholics to pray'. Our judges also praised her eloquent tweets."[1]

She lives in East London with her civil partner, Kirsty.