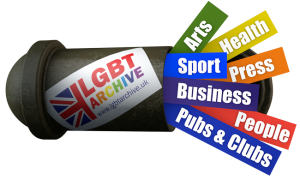 The UK LGBT Archive records the the history and memories of lesbian, gay, bisexual and trans people living in the UK.

It’s a virtual time-capsule, capturing the experiences of our time, and a chronicle of the achievements and challenges of previous centuries – the changing law, the amazing response to health epidemics, the newspapers and magazines that come and go, TV programmes, sports, lesbian, gay, bi and trans businesses, arts, music and theatre, events, pubs and clubs, and of course the amazing diversity of people who have had a part in our history.

The project was launched in June 2011 and was originally called The LGBT History Project. It was re-launched as The UK LGBT Archive in December 2015.[1]

In 2015 this project became a Key Partner of LGBT History Month.[2] and CHE voted to support it.[3] In February 2016 Ross Burgess read a paper about this site at the LGBT History Month academic conference in Manchester.

By early 2021, articles on this Wiki had been viewed twenty million times.

Some sources of information about LGBT history

All text in this wiki is freely reusable with certain provisos - see LGBT Archive:Copyrights. Some of the images may be subject to copyright restrictions. See LGBT Archive:Illustrations. Please email us if you consider we have infringed your copyright.