Difference between revisions of "Kenneth Kendall" 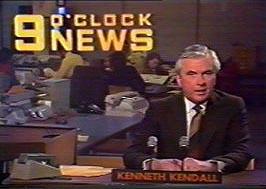 He was born in India and brought up in Cornwall. He studied Modern Languages at Corpus Christi College, Oxford, and worked initially as a schoolmaster. He served as a captain in the Coldstream Guards during World War II, and was injured on D-Day. He joined the BBC in 1948 as a radio newsreader and transferred to television in 1954. Although he was not the first newsreader on BBC television, Kendall was the first to appear before a camera reading the news in 1955. As he was employed on a freelance basis by the BBC, he also worked as an actor for a repertory company based in Crewe, and briefly at the menswear retailer Austin Reed in Regent Street, where he met actor John Inman and offered him a job in the Crewe company.

Kendall became known for his elegant dress sense and was voted best-dressed newsreader by Style International and No.1 newscaster by Daily Mirror readers in 1979. He left the BBC in 1961. From 1961 to 1969 he was a freelance newsreader, working occasionally for ITN and presenting Southern Television's Day By Day. He appeared as himself in the Adam Adamant episode "The Doomsday Plan", where he is kidnapped and impersonated. He appeared in a cameo role as a newsreader in 2001: A Space Odyssey, as well as in the Doctor Who serial "The War Machines".

He rejoined the BBC in 1969 and finally retired from news reading in 1981, allowing him to work on the Channel Four programme Treasure Hunt throughout its first run (1982–1989), . He also presented Songs of Praise.

Soon after retirement from news reading, Kendall lent his voice to the BBC Micro as part of Acorn Computers' hardware speech synthesis solution.

In 2010 he took part in BBC's The Young Ones, in which six celebrities in their 70s and 80s attempt to overcome some of the problems of aging by harking back to the 1970s.

Kendall lived in Cowes on the Isle of Wight with his partner Mark Fear, where he was the owner of a marine art gallery, and a keen beekeeper. Before owning the art gallery, he co-ran a restaurant: this was revealed in an interview in Radio Times in 1996. The year after his death, Mark Fear committed suicide, leaving a note saying that he could not live without his partner [1].

Largely based on a Wikipedia article.