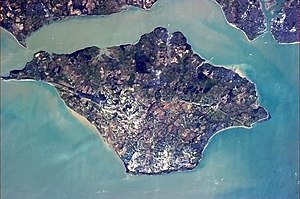 The largest town is Ryde.

In the 16th century Nicholas Udall was for a time vicar of Calborne on the Isle of Wight.

There was an Isle of Wight CHE Group. In 1992 an Island Gay and Lesbian Switchboard was launched [1]. In 1997 the Island Switchboard published 'Speaking Out' (Delta Press) about lgbt lives on the island.

Break out Isle of Wight is a group for LGBT young people to meet other young people, make friends, talk about things important to them and have fun! In 2019 it was advertised as meeting alternate Tuesdays from – 6.30pm-8.30pm [2].

There is a local group of the Lesbian and Gay Christian Movement.[3]

The newsreader Kenneth Kendall lived in Cowes with his partner Mark Fear,

The Wishnet website had an article entitled "History of the gay community on the Island".[4]

Isle of Wight Pride has been held in Ryde from 2017, however the 2020 Pride event was cancelled because of the coronavirus problem. 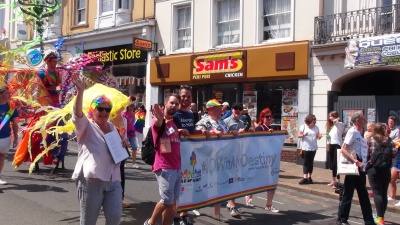 Ryde Pride 2018 (photo by Dr Clifford Williams)
'Outonanisland' was started in 2019 as an LGBT+ history and arts project[5] .