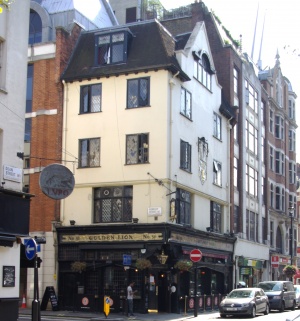 The Golden Lion, Dean Street
In 1976 Gay News listed only two gay bars (the A&B and the Golden Lion) in the whole of Soho.[1]

Mr George Lucas was a regular customer when the pub was also associated with rent boys in the 20th century. [2] In November 1987 a gay teacher, John Carbery, aged 53, was attacked outside the pub. He later died as a result of his injuries. Two young men, believed to be rent boys, were charged with causing his death [3]. See Timeline of West End Bars and Clubs.