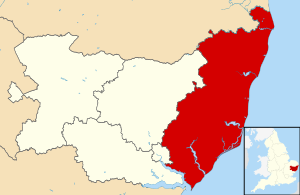 Between 1888 and 1974 there was an administrative county of East Suffolk, covering a larger area than the present district.

Aldeburgh is noted for its association with Benjamin Britten.

The composer Roger Quilter is buried in Bawdsey. Waveney district council have a contact for LGBT people.[1]

Norfolk LGBT Project has been commissioned to promote sexual health in Norfolk and Waveney.[2]