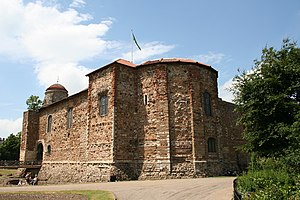 Colchester Castle
Colchester is a town in Essex, said to be the oldest town in Britain, dating from before the the Roman invasion in AD 43. As Camulodunum it was for a time the capital of Roman Britain, and its castle is built on the foundations of the Roman temple of Claudius.

The University of Essex is located in Wivenhoe Park, near the town.

Colchester CHE Group, founded 1972, soon switched to become a GLF group. A gay disco was started in the Recreation Hotel in 1977 by John Marshall, Gregg Blachford and others in 1977 [1].

Colchester Pride has been held from 2018 onwards.